A cozy studio, Brookfield Tai Chi caters to students and practitioners looking for a more intimate, personal setting. Our outlook and mission is to create a harmonious space that encourages individual growth and an expanded sense of friendship. Nothing is more important than building bonds with yourself and those around you. It makes for a better, healthier, and more engaged community. 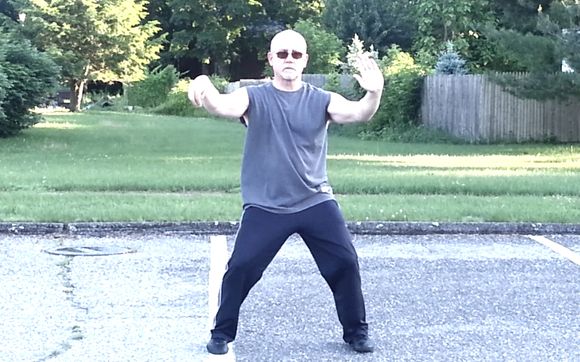 Vinny Candela was born in 1960 in New York City. He holds a black sash and is a disciple in Wu Style Tai Chi under Master Wendy Shih.

His first martial arts experiences span back to his high school days where he practiced wrestling. It is in these early days that he first became aware of using body leverage, staying low, and developing an overall understanding of how to use his body in martial format.

With a passion for more strenuous training and learning, Vinny then became a dedicated power lifter, achieving feats of bench pressing double his weight and 4-5 times his weight in squats. He continued this training for many years. At the time, Vinny did not realize the impact this kind of training was having on his body. Unfortunately, by the early 1990’s his years of power lifting had taken their toll. With overuse and compression, he was diagnosed with a spinal condition in his cervical and lumbar vertebrae. His doctor had recommended surgery; however, Vinny felt this was simply not an option.

This news and daily pain experienced turned his focus toward a more practical, health-minded search. What was the best type of exercise for health and regeneration? He found the answer in Tai Chi and Traditional Chinese Medicine (TCM).

With no shortage of determination to improve, he decided to pursue martial studies as the way to improve his spine and regenerate his body. He practiced Yang style Tai Chi and was introduced to Shaolin Kung-fu and BaGua at the American Center for Chinese Studies in Brewster, NY under Master Phil Sant.

After moving to Connecticut and doing some diligent searching, in 2007 he found Master Wendy (Wen Jing Shih), a doctor of TCM and 1986 National Wu Style Tai Chi Competition Winner. Master Wendy and her family operate the Chinese Healing Arts Center in Danbury, CT, specializing in TCM, Tai Chi and Qigong. The Shih family has been practicing the Chinese medical arts for over six generations.

From the very first class, Vinny dedicated his life toward learning and strengthening his broken body through TCM, Tai Chi and Qigong. Master Wendy’s style of instruction was relentless, diligent, and extremely strict. To say that she was a perfectionist does not do the experience justice. Each training experience was challenged by countless repetition of the most basic components of Wu Style Tai Chi. In his mind, the strictness was a hallmark of the authenticity of the form. He had finally found the art he was looking for.

“To me, Wu Style is more challenging than Yang because it requires greater balance and more control. Yang has a light flowing style, while Wu involves better core and leg training” says Sifu Candela. “The strong legs and core are what keep my back strong and pain free… I can tell when I miss a day, this work is like my daily medicine… movement as medicine, it’s brilliant in every part of the system. ”

After about 3 years of nonstop practice, in 2010 he was granted permission to teach alongside master Wendy, and with her permission begin his journey toward showing others how to yield the most from their practice.

Sifu Vinny built his home studio in 2012 and began openly accepting new students. He hosts on average 5-7 group classes per week as well as one-on-one study for those interested in more specialized learning.

With well over 20 years of practice and study, and a lifetime of knowledge, he still considers himself to be an eternal student and is endlessly looking to raise his inner spirit and abilities.

Balance is the Key

Finding a balance and maintaining it is crucial to personal health. Brookfield Tai Chi opened with the intent of helping people find a balance in life, providing a space and spectrum of classes that promotes a stress free life and allows for a better outlook on the day. Equal importance is placed on helping you find the physical, emotional, and spiritual balance you seek.